You are here: Home / Tools / Makita Vs DeWalt: Which Is Better?

Makita Vs DeWalt is an age-old discussion. Makita Corporation and DeWalt are both companies that are well known in the world of power tools. They are leading companies and the most preferred brand of any individual with a whim for woodwork for professional carpenters. One of the most common problems amongst carpenters and woodworkers is which brand to use for their work. You can also see our post that compares Dewalt with Milwaukee  In this article, we will compare the different aspects of both brands and review the tools in their most popular power tool combo kits to help make your buying decision more informed. 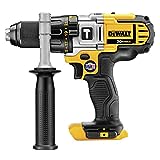 Both companies have products that are of high quality and similar features. While both companies manufacture top-notch products, Makita had the edge over DeWalt. To make it even better, most Makita products are more affordable than DeWalt, which is an important factor for all of us. However, it is to be noted that DeWalt is not an inferior brand in any way. One can be assured of its products and capabilities.

Makita offers a three-year limited warranty with all their products, which translates to replacement of their tool in case of damage due to faulty craftsmanship. You an also see our post that compares Makita with Hilti.

DeWalt offers a similar warranty on all their products as well. However, they offer an additional one-year free service for all their newly purchased products. Refurbished products are not included in this service.

Makita Corporation was founded in 1915 in Japan. They opened their shop in Anjō and expanded worldwide, from Brazil, China, Mexico, Romania, The United Kingdom, Dubai, Germany, Thailand, and the United States. They began as a sale and repair company for electric motors, lighting equipment, and transformers. They began selling power tools in 1959.

DeWalt began in 1924 in Leona, Pennsylvania. It was founded by Raymond DeWalt, who was also the inventor of the radial arm saw. It started with the sale and repair of woodworking machinery. In 1941, they rapidly expanded to meet the growing demands of the US government for wartime requirements. In 1992, they introduced their first line of electric power tools for professional use.

Over the next decades, both Makita and DeWalt shared a similar goal. They wanted to manufacture tools for the world, which were easy and effective to expand their companies.

While on a glance, the products of Makita and DeWalt might seem similar, there are quite a few differences that divide them. Let’s look at it in depth.

Makita DML185 flashlight uses a xenon bulb, which delivers a 4500 lux brightness, which translates to about 180 lumen, which is significantly higher than its competition DeWalt DCL040 flashlight. However, on the flip side, Makita DML185 tends to get hotter. It has a run time of about 4 hours, whereas DeWalt DCL040 has a runtime of about 11 hours, which is more than double the duration of the Makita flashlight. It also rotates in 4 different positions, which makes it more versatile.

Bottom Line: Makita and DeWalt have many differences in their products. The products should be chosen based on individual requirements.

DeWalt DCD985B hammer drill comes with a ½ inch ratcheting chuck and a travel bag; Makita XPH10Z provides none of these accessories.

Makita XSS02Z circular saw ( see the review of another variant too ) gives a TCT saw blade; however, DeWalt DCS393 does not.

Bottom Line: DeWalt tends to provide more accessories with its products than Makita

Let us compare the price ranges of some of their best-selling products:

Dewalt DCS393 is priced at $96, whereas the Makita XSS02Z circular saw is available for $152, making Dewalt the more affordable option in circular saws.

Bottom Line: In terms of pricing, Makita is overall more affordable than DeWalt.

It is safe to say that while there are some differences, they are tied in terms of their product portfolios.

Makita and DeWalt offer similar combo kits. Their impact drivers are equivalent, so are their circular saws.

Let us go in detail about the best products offered by Makita Corporation.

A hammer drill is used to drill accurately through hard materials such as concrete. They require a strong motor and a high torque to able to perform adequately.

Makita XPH10Z has a four-pole brushless motor with a maximum of 480 inch-pounds. It can be used as a hammer drill and as a regular driver drill for increased functionality. It provides 2-speed variation, 0-600 RPM, and 0-900 RPM. It weighs 3 pounds, a little heavier than the DeWalt Hammer Drill, but still light enough for ease of operation.  It runs on long-running 18-volt Lithium-ion batteries.

An impact driver is used to loosen frozen or over-torqued screws and nuts.

Makita XDT11Z impact driver comes with a variable speed of 0-2000 RPM with a torque of 1460 inch-pounds. It has a 4-pole 4-brush motor, which gives a higher RPM without compromising on torque. Made of high-carbon steel, it weighs at 2.5 pounds, which helps reduce operator fatigue. It operates on an 18-volt lithium battery and comes with a 3-year limited warranty.

It has a ¼ inch chuck to enable faster change and a work light for low-light and dark place application. 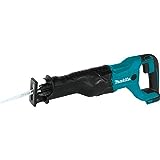 Reciprocating saws are powerful motorized toothed hacksaws that move in strokes. They can be used to cut different materials such as wood, metal, concrete, etc.

Makita XRJ04Z reciprocating saw has a variable speed motor with a maximum speed of 0-2800 strokes per minute and a stroke length of 1-1/4 inch, which enables faster cutting. It has a tool-less blade system which allows faster change of blade and a refined crank mechanism with minimizes blade bending. It also comes with an electric brake. It has a compact dimension of 4.69 x 20.5 x 8.62 inches. It weighs 8 pounds, a disadvantage compared to DeWalt’s reciprocating saw, which weighs only 1 pound.

It has the unique Makita’s Xtreme Protection Technology for dust and water protection to increase durability.

It operates on an 18-volt lithium-ion battery and comes with a three-year limited warranty.

Let us go in-depth, talking about some of the best products DeWalt has to offer.

DeWalt DCD985B hammer drill comes with a 3-speed brushless motor, namely 0-600 RPM, 0-1250 RPM, and 0-2000 RPM. It operates on a 20-volt lithium-ion battery and is 2.2 pounds in weight. It comes with a ½ inch chuck for better gripping and precision drilling. It also comes with a work light, and DeWalt’s 3-year limited warranty and a 1-year free servicing.

It is a heavy-duty product designed to avoid overheating and overloading, providing long life.

DeWalt DCF885B impact driver comes with a brushless motor, which leads to a long-lasting product. It has three-speed settings 0-1000 RPM, 0-2800 RPM, and 0-3500 RPM. It provides a torque of 1824 inch-pounds. At 2 pounds, it is lighter than Makita in weight. It operates on a 20-volt lithium-ion battery

Like Makita, it has a 1/4th inch chuck for faster bit change and a work light. It comes with a 3-year limited warranty and 1-year free service. 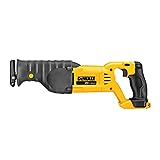 DeWalt DCS380B has a 4-position blade clamp, which allows flush cutting and increased versatility.  It has a stroke length of 1-1/8 inch and a variable speed of 0-3000 strokes per minute. It has a pivoting adjustable shoe that enables depth control and extended blade life. It has a double oil sealed shaft, which decreases contamination and increases durability.

Its compact design has a dimension of 6.13 x 18.31 x 4 inches and weighs only 1 pound. It runs on a 20-volt lithium-ion battery and comes with a limited 3-year warranty and a 1-year free service.

Makita power tools are made to have the edge over many others. And some of the key features that help them achieve this include:

DeWalt manufactures one of the most popular and best-selling power tools globally. Some of the features that make it possible are as follows:

1. Do the batteries get drained while the tool is not in use?

The batteries may get drained when the tool is not in use. However, it is to be noted that since they are lithium batteries are superior cells which can hold their charge for a long period. You can leave your tools for a while, and there will not be a noticeable discharge.

2. Can I use my Makita Drill with other Makita batteries?

Yes, you can use it with any other battery, provided it is 18 volts.

Both Makita and DeWalt are excellent brands to choose from. They manufacture robust products with high durability and value for money. While Makita tools have the edge over DeWalt in some of their products, DeWalt is no way an inferior company. You will not regret buying products from either company. However, it is important to take in individual needs and requirements before making the decision.