DeWalt is a popular hardware manufacturer of impact drivers. In this post, we compared the two popular variants,  DeWalt DCF885M2 vs DeWalt DCF885C2. Though the DeWalt DCF885C2 is considered as “upgraded” version of DeWalt DCF885M2, both these tools offer similar performance. However, You can see the difference if you look closely. So, what makes them unique, and which one is the right one for you? We will try to solve these problems in this article.

To compare both the products, we look into similarities and differences. We also look to derive which one is the best among the two. 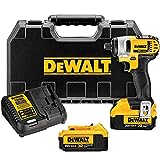 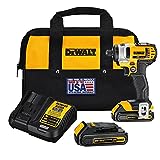 Winner :DCF885C2. It is less expensive than its other variant. This makes it very cheap.

Winner :DCF885M2. It has a longer battery life compared to its counterpart. It has at least three times the battery life of DCF885C2.

Winner :DCF885M2. It wins by a very narrow margin.

DeWalt DCF885C2. DCF885C2 is the better choice. It is lighter and cheaper. The reduced weight helps to decrease hand fatigue when working for a longer duration. For the asking price, DCF885M2 has only extended battery life to its advantage. Only choose DCF885M2 if you need extended battery life.

The design of both tools has remained the same. Both features similar handles with rubber padding.

The technical specifications of both tools are also the same. They feature the same speed, torque, impact rate, trigger, and chuck.

Both products offer all metallic belt hooks, 3-LED lights, and fast charge. Both tools provide single-handed loading of both chuck and tips. The LED lights on both products have a 20-second delayed turn-off. This also enables both the tools to act as a small flashlight.

The battery of DeWalt DCF885M2 is rated at 20V 4.0Ah. It has a full recharge time of 30min. The DCB204 20V MAX XR® lithium-ion battery pack has a boxy design. It also has a 3-LED fuel gauge system. The battery also offers dual voltage capabilities for charging at 12 and 20V.

The DeWalt DCF885M2 has 1,400 inch-pounds of torque. For a compact, lightweight impact driver, this is quite high. More torque means a smoother working experience. Also, more torque helps to fasten screw-in dense materials with ease.

Trigger in the design of DCF885M2 is in keeping up with modern ergonomics. It also has a variable trigger speed. To increase the speed of the impact driver, you have to apply more force on the trigger. Pressing the trigger gives you maximum speed. Lower pressure on trigger means lower speed.

It has ¼ inch hex shank chucks. It accepts 1-inch bit tips. The hex shank bit ensures better efficiency and penetration power. These bits are far better when compared to regular round shank bits.

The DCF885C2 batteries are rated at 20V, 1.5Ah. Being a new product offering, DeWalt DCF885C2 has a better battery design. The DCB201 20V MAX battery has a flatter design. The compact design allows better ergonomics.

It has ¼ inch hex shank chucks. It accepts 1-inch bit tips. The hex shank bit ensures better efficiency and penetration power. These bits are far better when compared to regular round shank bits.

A tool alone is of not a value for money proposition. So, manufacturers offer more accessories along with the tools. For a prospective buyer, this is a good offer.

DeWalt offers a battery, charger, belt hook, kit bag along with the impact driver. Here is the detail of the specifications,

Winner: – Draw. Both have similar content in their box.

When DeWalt introduced DeWalt DCF885M2, it had one among the fastest motor for its size. The product was revolutionary itself. The ergonomic design and compact body were a great addition. The impact diver accepts ¼” chucks and 1″ tips. It puts out 1,400 inch-pounds of torque and 3,200 BPM. Higher torque offers smoother working on hard surfaces.

It has a 2800RPM speed with a variable trigger. It also offered a 4Ah battery, which had enough juice for extended work hours. Even if you run out of juice, the supplied charger can top it up in 30min. This is an excellent addition to the extra battery that you get out of the box. For a contractor or homeowner, these features offer uninterrupted work. The added 3-stage fuel gauge indicator is a plus point.

Even though it is not the lightest in the crowd, the 1.54kg weight is manageable. Along with the box, you get an all metallic belt hook. This helps to make life a lot easier. The impact driver is also quite compact at 9.60 x 16.00 x 4.88 inches. Getting into nooks and corners is easy. It also has 3-LED lights located around the chuck. This provides illumination when working in a tight spot. The main drawbacks of DCF885M2 include possible heating over extended work hours. It is also costlier at $259.00. This makes the product less appealing to possible buys.

Apart from these drawbacks, it’s a very capable product. The product comes with 2 batteries, a charger, a bag and a belt hook for the asking price. You have to buy tips and chuck on your own.

DeWalt introduced the DeWalt DCF885C2 is update version of the other. Yet it has the same technical specification as that of DeWalt DCF885M2. This makes its existence a bit of a gamble. The DCF885C2 offers similar design and features to that of DCF885M2. Both have a similar technical specification. It churns out 1,400 inch-pounds of torque. It has a speed of 2,800RPM and an impact rate of 3,200 BPM. It accepts ¼” inch chunks and 1” tips.

DCF885C2 is lighter at 1.27kg and has a dimension of 10.10 x 16.00 x 4.80 inches. These figures make DCF885C2 one among the most compact in its category. DCF885C2 is also cheaper at $179.00. This makes it a bargain. The features it offers for the asking price is great. The main disadvantages include possible heating over extended use. Also, the battery has only 1.5Ah capacity. Even though it comes bundled with a charger and a charging time of 30min. The battery also lacks a fuel gauge system.

The DCF885C2 gives you a stellar offer at $179.00. It offers excellent features for the asking price. Along with the tool you also get a belt hook, charger, and 2 batteries.

1. Can both homeowners and contractors use these impact divers?

Yes and No. Both DeWalt DCF885M2 and DeWalt DCF885C2 can handle the needs of a homeowner. But for a contractor working at an industrial site may need something more powerful. But if they are looking for a ¼” impact driver, then both these products are great offerings.

No. Some sellers listed hard case along with both DeWalt DCF885M2 and DeWalt DCF885C2. Only Type 1 and Type 2 impact drivers get Hardcase. The most recent type 5 gets a soft bag on various online platforms.

3. What is the variable speed trigger?

Both drivers use a variable speed trigger. You apply more force on the trigger to increase the speed of the impact driver. For full-speed, depress the trigger all the way through.

4. Can this impact diver get the lug nuts off your car hub caps?

Most of the lug nuts in car hug caps are torqued to 1200 inches/pounds. Even though the tool has 1400 inch/pounds, it is not advised to try by many. Better use a ½” impact driver.

6. The no. of batteries included in the package?

Both products include two batteries and a charger.

7. Does this come with bits?

No, you have to buy a bit set from a local shop or buy online.

The DeWalt DCF885M2 and DeWalt DCF885C2 compact impact drivers are great products. Both of these tools are evenly matched in technical specifications and packaging. But being a recent release, the DeWalt DCF885C2 is lighter and cheaper than DCF885M2. Its small battery only bogs it down. But the tool comes bundled with an extra battery and fast charging. This makes it a stellar offer for the asking price.