Installing a crown molding to any projects adds an instant level of sophistication and adds aesthetic value. There are various types of crown molding available. However, people often get intimidated on how to cut a crown molding to fit their requirements, often ending up hiring a professional. A miter saw is a type of circular blade saw used to make accurate crosscuts and miters.

In this article, we will provide detailed guide on how to use a miter saw for crown molding. By following these simple steps, you can save the money you would spend on a professional and feel the accomplishment of completing the task yourself.

There are two types of crown molding fixtures, an inside corner, and an outside corner. We will discuss how to cut both types of fixtures.

Turn off all your equipment. Wear personal protective gear such as work gloves, clear protection goggles, and earplugs. Keep all your tools in one place, so they are within reach.

Next, we will be moving to the right and making an inside corner, which is rarely a square. To avoid unsightly gaps, you will need what is called a coped joint. The coped end of the second run will fit snugly into the profile of the first run—Mark the angle cut on the molding using the marker.

Now, using the marker, trace the edge of the molding profile. Using a coping saw at a 30 or 40-degree angle, undercut the excess molding wood. Test it will a scrap piece of molding and use a file or a sanding block to make minor adjustments.

At the other end of the molding, turn on the miter saw and make a straight cut adding 1/8th of an inch to the piece’s end to ensure a snug fit.

If you are cutting an outside corner, you will need to measure and mark each piece of molding, noting the trim where they come together on the wall. Then set each piece of the miter saw upside down. Turn on the miter saw and cut at the appropriate 45-degree angle.

Now hold the two pieces of trim on the wall. The miter cuts should fit into each other like the bow of a ship. In case of small gaps, use a wood filler to fill it in.

As you work around the space, you may encounter extra long runs of molding. These will require a scrapped joint created by joining two complementing 45-degree angle cut molding. And for instance, where the molding runs into a wall or an unmitered mill work, you will make a straight cut to create a butt joint, as mentioned in the previous steps.

Things You Would Need

There are different miter saws available which come with various attachments. We will assume that your miter saw is a basic model with little to no attachments. These are the things you would need.

Now that you know how to use a miter saw for crown molding, the next step is to find out the best miter saws to purchase. We have got your covered on that front. We have researched and tested different miter saws to curate a list of the top three for you. Here are the candidates:

DeWalt DWS780 is a compound miter saw which comes with a 15-ampere motor that gives a speed of 3800 RPM. It has a bevel sliding of 60 degrees and 50 degrees right and left, respectively. And in both directions, stops are at 0, 22.5, 33.9, and 49 degrees. Its detent plate has ten positive stops, which promote fast and easy adjustment. Its 12-inch carbide toothed saw is sharp and cut through various types of materials. It can crosscut 2 x 14 at 90 degrees and miter 2 x 10 at 45 degrees.

It has several features that promote accuracy and safety, such as machined base fence support, a cam lock miter, detent override, and bevel crown stops. It has a laser guide, which shows exactly the blade will touch the material. It has a rail lock latch, which maximizes vertical cutting capacity. It has a dust bag that collects most of the sawdust. It comes with a carbide blade, a blade wrench, a dust bag, and a vertical material clamp.

They provide a one-year free service and a three-year limited warranty. 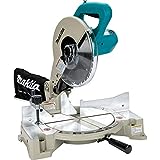 Makita LS1040 is another sort after miter saw. It also has a 15-ampere motor but provides a higher speed than DeWalt DWS780 of 4600 RPM. It has a direct drive and a soft start motor. It has a dual post compound pivot arm. It has a bevel sliding of 45 degrees to the left and 52 degrees to the right with nine positive stops.

Its 10-inch carbide toothed blade, combined with the robust motor and high RPM, makes cutting to most material accurate and straightforward. Weighing less than 28 pounds, it is quite portable compared to DeWalt DWS780. It has a fluorescent light that illuminates the work surface, providing greater visibility.

It comes with a 1-year limited warranty and a 30-day money-back guarantee. 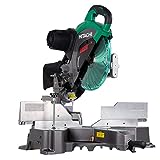 Similar to DeWalt and Makita Miter saws, Hitachi C12RSH2 has a 15-ampere motor and the highest speed in the trio at 4000 RPM. It has a bevel sliding of 45 degrees in left, 57 degrees right, and a bevel maximum of 45 degrees with positive stops. It can easily process larger material while making bevel cuts.

In terms of accuracy and safety, Hitachi offers a lot of features. It has a laser marker to guide where accurately the blade will cut the material, a splinter guard, and a dust bag for sawdust collection. Weighing at 59 pounds, it comes with a 12″ 60T TCT Saw Blade, Vice Assembly, 17mm Box Wrench, and Dust Bag. Hitachi C12RSH2 offered a 5-year limited warranty, much higher than DeWalt and Makita.

1. How should I position the crown molding on the miter saw?

2. What kind of miter saw should I use to cut crown molding?

3. Which is the Best Miter Saw to cut crown molding?

There are various types of miter saws, which are good contenders for the title of the best Miter Saw. We recommend DeWalt DWS780, Hitachi C12RSH2, or Makita LS1040. While others may disagree, this is our personal recommendation based on extensive research and testing.

We hope that this article on how to use a miter saw for crown molding has given you enough knowledge. Now that you have the basics down cutting and installing a crown molding is an easy way to boost your project and increase its value. With a few precautions and following the procedure, you will be decorating your place with crown molding in no time.