Nibblers and shears are the most commonly used tools for cutting sheet metal. Though they may seem the same, they are very different. In this article, we will focus on their functions, pros, and cons. We will also differentiate Metal Nibblers Vs Shears.

For projects which need a tight radius and perfection, nibbler is the better choice. It is more accurate and precise. For heavy tasks, prefer shears.

Nibblers are the clear winner here. The radius achieved by using a nibbler is very tight and precise. This is mainly due to the working process of a nibbler. It glides on the top of the metal sheet. You can create intricate shapes and also do complex work.

Shears create a large and clumsy radius. The precision and accuracy are also low. In a single pass, you cant get the same precision as a nibbler. You may have to make multiple cuts. Approaching the cut from various sides can also increase the precision. But this is usually not feasible.

Again, Nibblers win the battle here. The speed of both the tools vary. And the difference is not small. Nibblers work very fast. You can cut a metal sheet in an expeditious manner with a nibbler. They glide on the sheet-like knife cutting it smoothly. Shears are the slower ones. Due to its design and working process, it cuts slowly compared to the nibbler.

Shear has the edge here in its case. The material that is removed when cutting is called a kerf. Many processes produce kerf. Cutting lumber with handsaw also produces kerf. You also create kerf while cutting metal sheets.

The kerf produced by a nibbler is wide. Thus, the cut you make has a thicker slot cut in the path of the tool. Shears usually have minimal kerf. Some shears can even minimize kerf.

Shears are the ideal choice in this field. Although nibblers cut very fast, they usually produce a lot of unwanted mess. The metal waste is thrown all around the workplace. The metal pieces are harmful to everyone. They also cause harm to the floor and walls, let alone the worker. If the project is delicate or can be affected by this waste, don’t use a nibbler. If you want a clean place after you’ve finished working, don’t use a nibbler. Or you can limit the cutting area to fix this problem.

Due to their method of cutting, shears don’t create much mess. They usually isolate the mess. You can have a clean workplace after you have used the shear.

Shear is a perfect choice for heavy-duty tasks. Single-cut shear especially is very useful for this purpose. Nibblers are preferable only for light tasks.

Both the cutting tools are compact and easy to use. They can be powered in various ways. Both can cut through multiple metal sheets.

Features And Technical Specifications Of Nibblers

Features And Technical Specification Of Shears

A metal nibbler is a very compact cutting tool. Its uses can surprise you. You can cut metal sheets in a speedy manner. It is also useful for tight curves. Without a nibble, making tight curves can be very difficult. The working of a nibble is unique. The nibbler has a shaft that moves linearly. The shaft moves through a die, which is fixed. The ridge on the shaft cuts off the pieces of metal every time the ridge passes from the metal. When you push, metal is cut by metal in the nibbler shaft. The die is fixed at 90 degrees. The sharp tool doesn’t jam and cuts through smoothly.

A good thing about nibblers is that it doesn’t distort the metal. It can also cut very tight curves. You can easily carve intricate shapes with a nibbler. Since the head of a nibbler is small,  you can drill a pilot hole for cutting in the center of any panel. This will help the nibbler to fit its head into the sheet.  Nibblers have some disadvantages too. The foremost is the mess created. While cutting the metal, a nibbler makes a lot of mess. Thousands of metal chips are produced. You will find waste metal spread all over. This metal waste can mess up a clean working area.

The sharp chips can cause harm to the floor, wall, and also the workers. You need to make sure the waste doesn’t affect the project. Limiting the cutting area can help in limiting the spreading of this waste. Another disadvantage is the large kerf. Kerf is the area removed. Nibblers have a kerf larger than that of a shear. Thus, planning is better before cutting. You need to be sure of having enough material to cover the kerf. Nibblers are useful for sculptors and metalworkers for cutting patterns in metal sheets.

Shears are a small hand-held tool for cutting. They have a composition similar to that of a scissor. But these are for cutting metal sheets. With wider blades, shear is an alternative for nibblers. But it is less handy in use than a nibbler.  The opening is shears is small. They have jaws on both sides. For cutting, first, the metal sheet is to be inserted between the jaws. Then you have to push forward. This automatically does the cutting of the sheet. The metal sheet is cut along the blade length.

In single-cut shears, the sharpened blades are at the top and bottom of the sheer jaw. And both the sharp areas face each other. The opening and closing of the jaws cleanly slice the sheet from both sides. Their work can be compared to that of a scissor. But the blade here is movable. An advantage is that it doesn’t create waste while working.

However, it may lead to some distortion in the material. Thus, we don’t use single-cut shears when we need the metal to be flat. Due to wider blades, shears need wider turning circles. You may even get a distorted edge if you push beyond the boundaries. Another advantage is the high capacity. They are suitable for heavy-duty tasks.

As the name suggests, double-cut shears have two separate cutters. When you move the tool through the material, it removes the material in thin strips. This means that the kerf produced is more extensive than single-cut shears. But the good thing is that the mess made is easy to clean. They cut without creating much distortion. But for this, you have to keep them straight. Unlike single-cut shears, double-cut shears aren’t good at making curved cuts. Thus they are not fit for heavy-duty tasks. But they are a suitable choice for light metal sheets. They are easy to use, quick, and also don’t distort the shape.

Best Nibblers In The Market 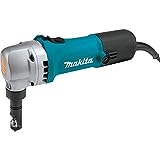 The Makita JN1601 nibbler has a die that can rotate 360 degrees. The 5Amp motor can deliver 2200SPM. You get precise and clean working with broad 1/4″ strokes. You can work on corrugated sheets, deck plates, keystone plates, etcetera. The product has a better grip with ergonomic and slim body design. It is easy to handle and light. For convenience, it is equipped with a built-in thickness gauge. Faceless downtime with a simple punch and die replacement. It also has a considerable capacity. You can cut mild steel up to 16 gauge and stainless steel up to 18 gauge. Lock-on sliding with enables continuous operation. The cord length is 6.4 feet.

This Bosch cordless nibbler has very high performance. It runs on an 18V lithium-ion battery. It is suitable for heavy-duty tasks, construction works, etcetera. It is durable and lasts long. The protection circuit for the electric motor increases its life span. It has restart protection for your better safety. This means that the tool won’t start by itself. The stroke per minute (SPM)rate is 1400. Since it is cordless, you get high mobility. The body design is well balanced and enables easy handling. The circumference of the grip is 185mm. The cut thickness is 1.6mm. The cutting capacity is 0.7mm to 1.6mm in steel and 2.0mm in aluminum.

Best Shears In The Market 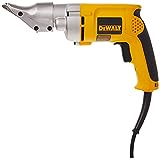 The DeWalt DE890 shear makes cutting through metal very easy. It weighs around 4.7 pounds. The corded shear has an innovative design for shearing 18 gauge mild metal sheets. It has a powerful 5Amp motor and SPM of 500 strokes per minute. Its head can rotate 360 degrees giving more precision in the task. Ball bearings in the motor make it durable. The high-power motor can run non-stop, giving high efficiency. It cuts strips of 7/32″. It can take a radius of 5-1/2″ and higher. The versatile tool can cut a variety of thicknesses. The capacity for shearing stainless steel is 20 gauge—the length of the tool of 9.125inches. 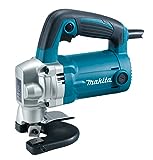 The Makita JS3201 model has the best aesthetics. It uses a motor of Angela Grinder, GA5010. It has an ergonomically designed body and rubberized grip. The soft rubberized grip gives more comfort and control while working. It doesn’t cause any fatigue. The tool weighs 3.4kg and has a minimum cutting radius of 50mm. You can store hex wrenches in the tool itself. The motor state is safe from scrap material as it has a protector for this purpose. This enables error-free, smooth cutting. Also, it doesn’t produce much noise while working.  The max cut in mild steel is 3.2mm, in stainless steel is 2.5mm, and aluminum is 4.0mm.

1. For heavy-duty work, which shear should I prefer?

For heavy-duty tasks, use Single-cut shears.

2. Can I cut brass with shears?

Yes, you can cut brass with shears.

3. Is a nibble corded or cordless?

A nibbler can be both corded or cordless.

You can do the same job with both the tools. The difference lies in they complete the job. If your work is time-sensitive, requires high precision, and you don’t care about the mess, go with nibblers. For tasks where time is not much important, the task is massive, and you do care about the tidiness, go with shears. We hope the article was useful to you!